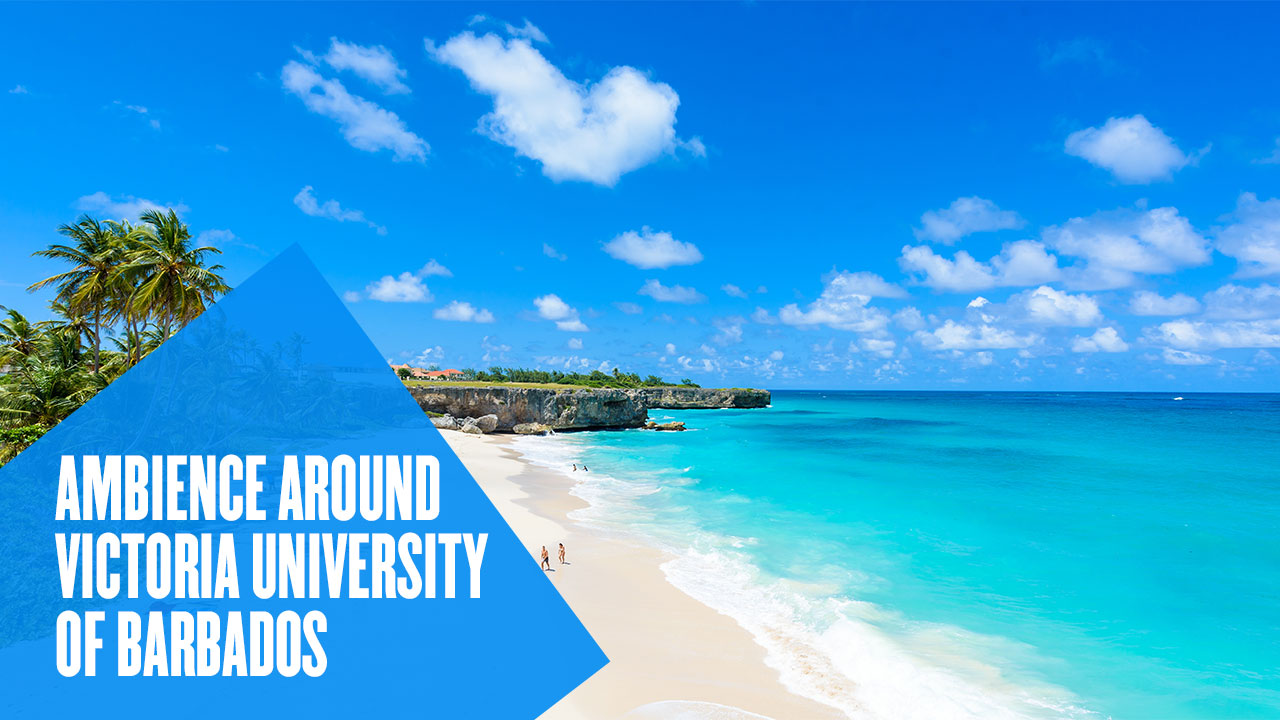 Ambience Around Victoria University Of Barbados

Among the numerous countries and Universities, Victoria University of Barbados stands out because of its unique blend of quality education and quality life.

Barbados, with its capital Bridgetown, is an eastern Caribbean island and an independent British Commonwealth nation.

Barbados enjoys a year round tropical climate that is perfect for going to the beach. There are two seasons: the dry season, from early December to May, and the wet season, which lasts for the rest of the year.

Society in the Caribbean is multi-racial, multicultural and multilingual.

Population is predominantly of African descent. A considerable population of Indians settled in Barbados during the British colonial era and most of them have since acquired local nationality. So, the people in this island also have an image of Indian culture and traditions too.

The Barbados people are very friendly.The official language and the medium of teaching both is English which helps to learn and understand better.

Barbados is an island of great natural beauty, from the wonder of underground caves to the beautiful vistas(views) and the tropical colours of flora are found across the island.

Apart from quality medical education, it is also one of the best tourist destinations to be in. It is a beautiful island with great beaches and a lot to do.  This island famous for its incredible sea life, boasts of some of the world's best dives and surf is fantastic.

Food will be the unsung hero during your stay. Flavors influencing Caribbean cuisine come from India, Africa, Asia, and Europe. Caribbean food is bold, flavorful, spicy, hot, fresh, and truly representative of a world cuisine that stands on its own.

Flying fish & Cou Cou is the national dish of Barbados.  Locals make dishes with cornmeal and okra, or breadfruit and green bananas.

The Barbados Dollar (BBD) has been the currency of Barbados since 1935. 1 Bajan dollar equals 36.26 Indian Rupee.

Victoria University of Barbados is one of the fastest growing Medical universities in the Carribean. Now that you know the ambience of the university, what’s your call?

Victoria University of Barbados, School of Medicine (VUB) is one of the well-recognized and fastest-growing medical universities in Barbados, North America. Among other recognitions, the University is listed in World Directory of Medical Schools (WDOMS), chartered by Ministry of Education, Science, Technology and Innovation, Government of Barbados, approved by Medical Council of India (MCI), and offers US-Based International-Standard MD Program (equivalent to MBBS).

Know more about The University, MD Program, or contact us for admission inquiries.

MD in Barbados: Pre-Departure Ceremony Organized in India For 2019 Batch of Victoria University of Barbados

Let Us Help You

Become a Partner With Us!